The Northwest Florida Chapter of NAIOP, the Commercial Real Estate Development Association, recently presented its 2019 Rehab/Repurpose Development of the Year Award to the Studer Community Institute (SCI) Building in downtown Pensacola, Florida. Home of Studer Community Institute, the SCI Building has completed a dynamic renovation project that includes an upgraded exterior, enhanced common areas, and the addition of a café. Stirling Properties, which provides third-party property management and brokerage services at SCI, submitted the entry on behalf of the owner.

The award-winning project was the redevelopment of the former SunTrust Tower, an iconic 10-story, 96,300-square-foot office building. Having managed and leased the property since 2006, Stirling Properties helped facilitate the sale of the building in 2017 to Quint and Rishy Studer and continued management and leasing assignments under the new ownership.

Built in 1974, the tower’s geometrically shaped structure, outdated building systems and location on the periphery of Pensacola’s CBD presented leasing challenges (nearly 50% vacancy) for the new owners against the changing dynamics of the office market. 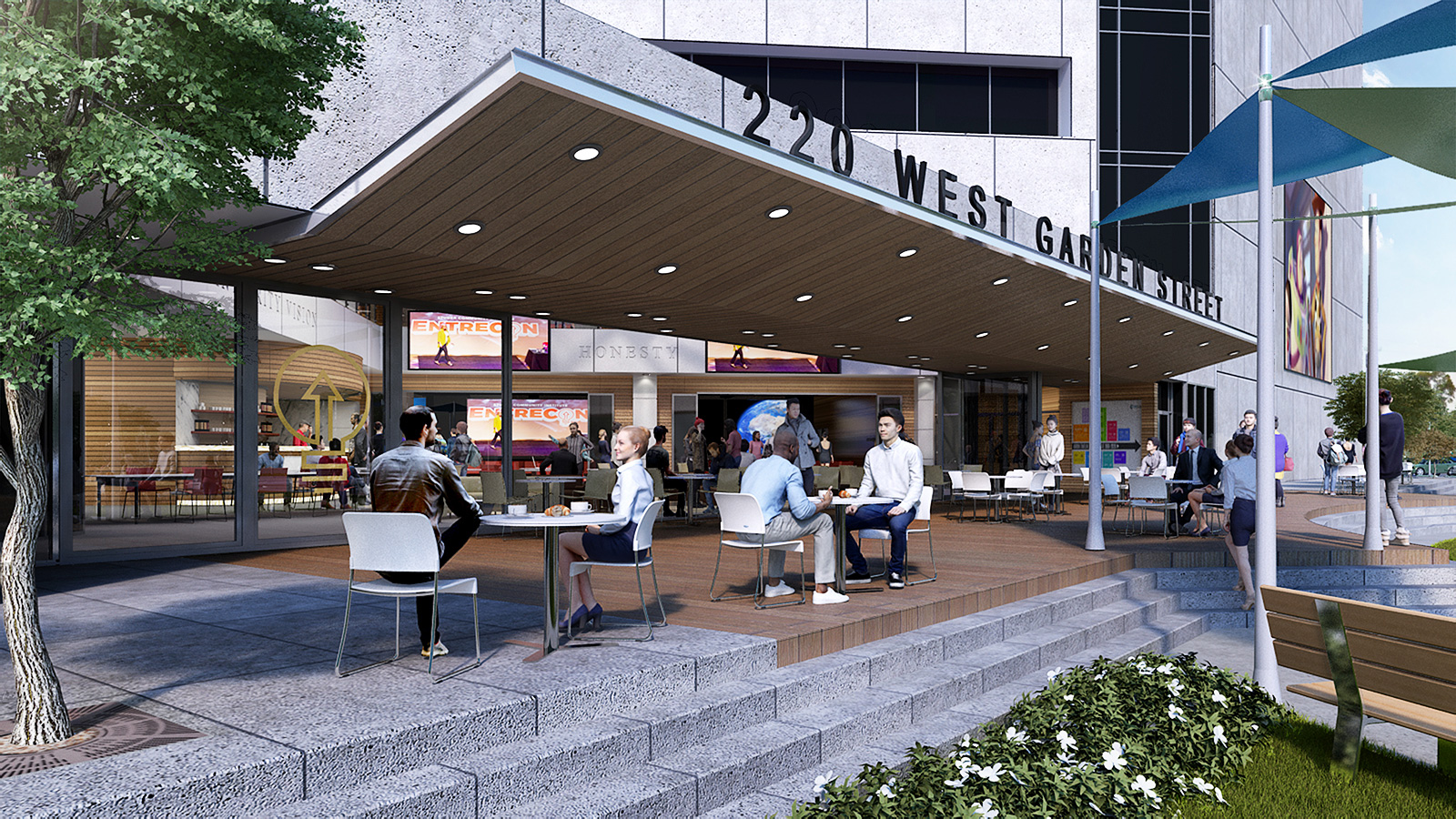 Over the course of the 14-month renovation, critical building systems such as HVAC, life safety, elevators and electrical were replaced, as well as upgrades to the roof, common areas, corridors and restrooms. While most of the building remained a multi-tenant office tower, the goal was to build on the uniqueness of the architecture by repurposing the 1st floor and outdoor plaza into a shared community space. These plans centered around the owner’s intent to convert the building into a community center focused on creating dialogue, hosting speaking engagements and events, and creating an open public space for citizens to meet and enjoy downtown Pensacola.

All existing tenants remained in place during construction. To cause as little business disruption as possible, the Property Manager and the General Contractor had to coordinate work on a case by case basis around tenant meeting schedules.

The new SCI Building provides tenants (both former and new) with an enhanced sense of place and ample added amenities. The redevelopment project also fills a niche in the local office product type. It has become a sort of incubator, opening the door for other planned mixed-use projects in the area.

The transformation of the property, along with Stirling Properties’ combined property management and leasing efforts have resulted in improved tenant satisfaction—all tenants have remained, with most having renewed their leases. The building is now at 95% occupancy. 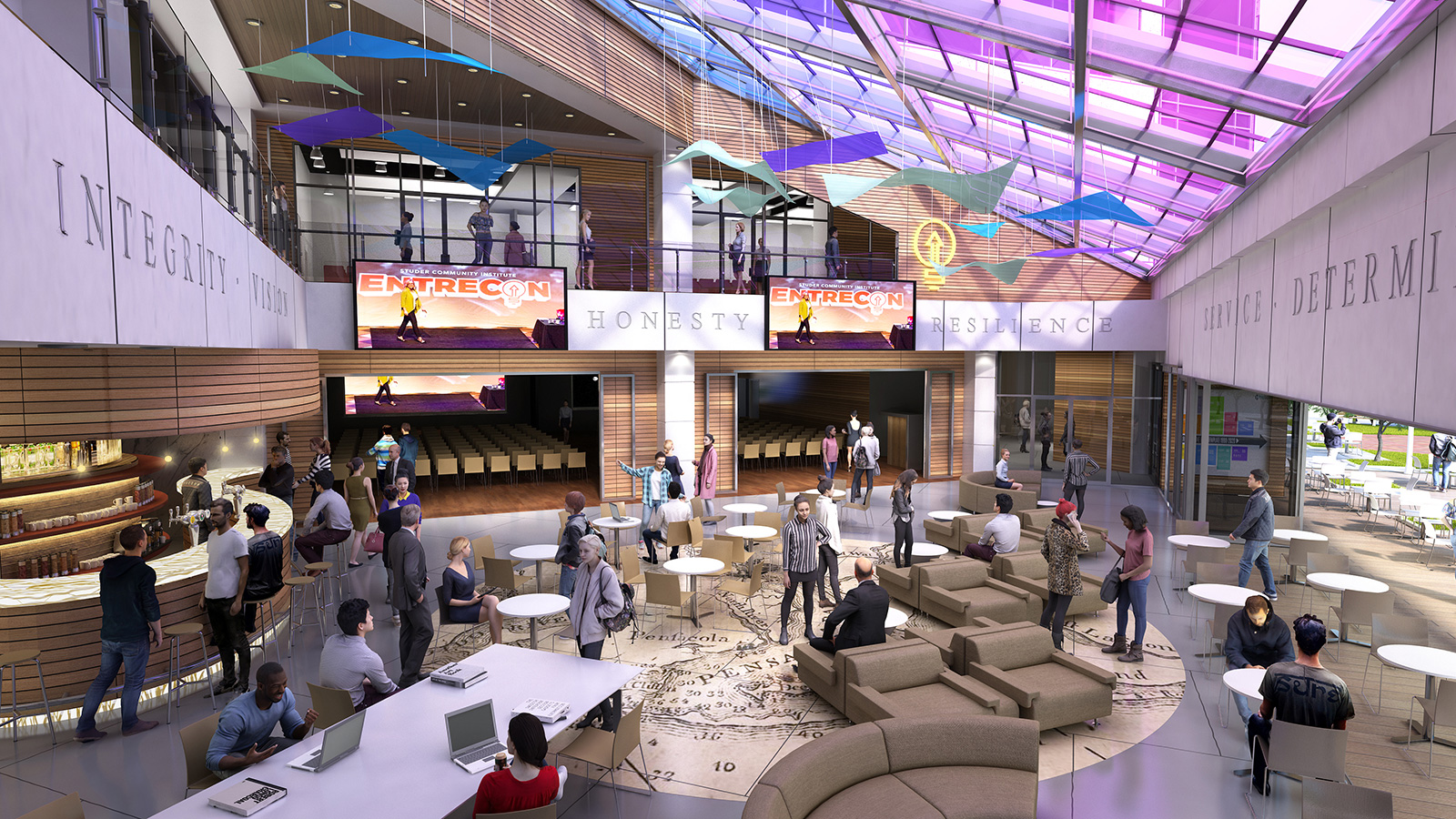 Over the past several months, the University of West Florida’s Center for Cybersecurity has moved from its campus location into 9,948 square feet (SF) of office space at the SCI Building, and Pen Air Federal Credit Union occupied another 3,828 SF in the Atrium. The global engineering firm of Mott MacDonald has renewed its lease and expanded its footprint by 4,364 SF for a total of 21,617 SF. SunTrust Bank’s (now Truist after a merger with BB&T) commercial lending group has occupied 4,406 SF. Most recently, we welcomed the law offices of Morgan & Morgan, which leased 9,432 SF of space on the top floor, and Berkeley Research Group, a global corporate consulting firm, recently signed a lease on 2,305 SF. Stirling Properties’ commercial advisor, Jason Scott, represented the landlord in these lease transactions.

With a full tenant roster, there is little doubt that the building is not only an upgraded version of itself but is now a place where the community can gather—where ideas are formed and implemented.

Congratulations to the Studer Community Institute for this esteemed honor and your leadership and vision in the Pensacola community and surrounding region.