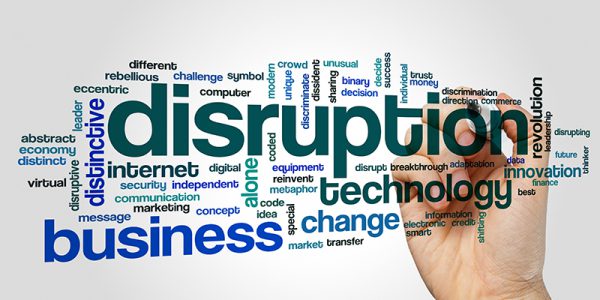 I want to share an intriguing quote I heard recently: “History is nothing more than a record of disruptions.” When you think about it, the sentiment is entirely accurate. If it weren’t disruptive to the logic or actions, it wouldn’t be worth remembering, learning from or memorializing. Disruption is difficult, stressful and, well, disruptive. But boiled down, disruption is progress. We can’t advance as a society without changing our mindset, which leads to behavioral change, then systemic change.

We are living in a simultaneously historic and dichotomous time. In the throes of a global pandemic, we had nowhere to go and nothing to do. But despite that, change occurred more rapidly than ever before. How we react to that change can and will determine our future.

Some people have opted to sit back, wait it out, expecting things will eventually return to normal. They view the situation as temporary. To others, this is an opportunity of a lifetime, a chance to hyper-focus on our actions, reactions and interactions with each other and our surroundings. It’s become a chance to re-think flaws in the system—whether physical or social—and push for progress. Those are the trendsetters and change-makers.

Growing up a child of the 80s (who could be classified as both a Jock and Nerd), I had two people who significantly inspired my youthful ambitions: The Boz and The Woz.

The Boz (Brian Bosworth) was the most formidable and rebellious college athlete of the decade. Middle linebacker for the notoriously rough Oklahoma Sooners, he was an All-American first-round draft choice who thumbed his nose at authority. He rocked a faux-hawk and earring and was known for simply crushing anyone who came near him. When he was suspended from college football for steroid use, the media noticed, and reports of drug use and other poor behavior by college athletes were brought to light. Ultimately, his descent from exalted hero to reviled cheater started a wave of mass investigations into college sports that altered public opinion and were the precursor to many rules in place today.

The Woz (Steve Wozniak) used his brain rather than brawn to create the first Apple Computer. Sometimes referred to as “the other Steve,” Wozniak was the co-founder of Apple along with Steve Jobs, and was the actual innovator who created the first products that led to the smartphones we are all tethered to today. Woz was seen as a true pioneer, the obscure reference that techies worship, the guy so cool that he is a question that is an answer on Jeopardy.

A few years back, I had the opportunity to meet Steve Wozniak when he delivered the keynote address at a conference I attended. While waiting in line to greet him, I thought, “What do I say to him? He is The Innovator, The Original Disruptor.” My fawning fanboy questions ended up something like, “Where did the idea and inspiration come from to create something so ingenious? How did you have the foresight to change the way people thought about technology? With technology that was only accessible to the largest and richest of big businesses to solve the most technical problems, how did you know the real power was to give everyone access?”

In reality, the question was more like, “So, how did all this happen?” But he’s The Woz; he knew what I meant. His response, some of which he repeated in his speech, floored me. He said, “I didn’t invent anything. I’m an engineer, not an inventor. All I did was take other people’s ideas and existing products and piece them together. I didn’t have the foresight to see a market for the product. I made the first one for myself, then we gave the plan to our computer club. I had no clue anyone other than our small group would ever want or have use for it. Steve Jobs was the one who realized it could be more than that.” The first Apple computer was clunky, lacked a monitor and was just a compilation of parts designed to serve other purposes. The Apple II was the model that most remember, designed explicitly for consumer sales and backed with the marketing savvy of Steve Jobs. These led to the products that changed the world.

Where am I going with all this? In the commercial real estate industry, we, too, are at an inflection point. No new technology has come out of this pandemic relative to our industry. Still, the acceleration of its use in an industry that has long been behind the curve for adaptation is astounding. Much like Wozniak assembling a few parts that changed the world, companies are focused on taking individual software platforms and merging them to create functional integrated solutions. They are using tech to create more efficient systems to run our properties and reduce carbon footprint. Others are utilizing tech to create more energy-efficient features, building materials, work from anywhere models and supply chains. Retailers used tech seemingly overnight to pivot their entire delivery systems to meet consumer demand.

Likewise, social changes can be likened to the Brian Bosworth story. Our society has sluggishly dragged forward in recent years with a complacent attitude toward issues like racism, gender inequality and environmental concerns. The Boz wasn’t the only athlete that broke the rules in the 80s. We, in general, turned a blind eye to the poor behavior of many athletes, celebrities and politicians because we wanted to exemplify the ideal and not rock the boat. In turn, the incidents that caught the world’s attention over the last year have thrown open the door for true meaningful change.

Was The Boz a bad guy? No. Was The Woz the ultimate genius? No. Their images over that decade do, however, represent the massive social and technological change that led to disruption, which in turn became history.

It has been echoed since COVID hit that there will be winners and losers in its wake. Which category we fall into depends on how we adapt to the issues brought to light during this time. Those that resist change or wait it out on the sidelines, in some way fail. Those that adapt to technology, embrace social change and recognize environmental issues will prosper. Just as we smugly look back on history at those who accepted appalling acts and unthinkable practices by today’s standards, we too will be judged by our children, grandchildren and great-grandchildren.

Look at your business (both personally and professionally) and how you can adapt to be part of a tech-savvy, socially conscious and environmentally responsible future. These issues will be the biggest challenges that our industry and society will face going forward. People, products, properties and processes that confront these issues head-on will be the disruptors and change-makers. They are our future and the winners. Those who just wait it out or go back to how it was are not. Simply put, embrace disruption, or risk becoming history.