Even though Women’s History Month has come to an end,
let’s not let the spotlight fade. 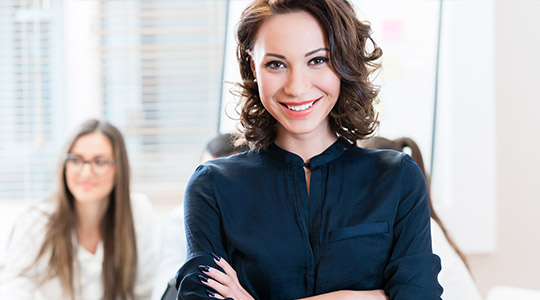 Last month, we celebrated Women’s History Month, an annual declaration that spotlights the contributions of women to events in history and our society. We reflected on the amazing accomplishments and resilience of the many women that paved the way for equality, especially in the workforce.

While we still have a great deal of ground to make up, I think it’s important to recognize how far women have progressed. Consider the recent advancement of Louisiana legislation aimed at closing the income gap and gender inequality. News headlines continue to cast a spotlight on gender barriers every day.

A recent comprehensive study commissioned by CREW (Commercial Real Estate Women) Network, 2015 Benchmark Study Report: Women in Commercial Real Estate, found that women in commercial real estate are more satisfied with their career progression than they were a decade ago, a substantial leap for our industry. The improvements included more women filling senior vice president, managing director and partner positions—even women starting their own real estate companies. Women in commercial real estate have achieved equal or close-to-equal standing as men in many aspects. (Read the full report HERE.) This information is a timely and welcomed example of some of the strides women are making.

Also, according to Womenable’s 2016 State of Women-Owned Businesses Report, the number of women-owned real estate firms has exceeded overall growth in the industry by an 11-point gap, and women-owned brokerages have also seen a nearly 30% increase in sales.

The South has seen the greatest growth in women-owned businesses, with eight of the 10 fastest growing states in our region. Locally, the number of women-owned businesses in Louisiana has grown by 48.8% since 2007, ranking our state 10th nationally for growth of such industries. (For more statistics on women in the workforce, view the entire report HERE.)

It’s truly an exciting and rewarding time to be a business owner today. We’re breaking traditional gender molds and showing how women can be effective in leadership positions. Since 2010, Stirling Properties has achieved some of its greatest accomplishments, and I am proud to have played a role in that.

Today, Stirling Properties manages 16.4 million square feet of property, an increase of 50% since 2010. In addition, total gross revenue has increased by 140% and management fees are up 67%! Watch our complete Stirling Properties highlight video HERE.

I have had the pleasure of working in the real estate industry for more than 30 years, and am very involved in the community, as well as numerous nonprofit organizations and networking affiliations. I am one of the founding members of the New Orleans CREW organization and served as President and Board member for many years. I am familiar with the struggles women have faced in this industry, but also appreciate the headway that we have made.

More and more women are exceeding in the workplace, at home and in the community. Women across the Gulf South region are leading businesses and setting a standard of professional and personal excellence on a daily basis. The barriers are coming down. Industries—such as commercial real estate—that were once dominated by men are filling with talented ladies.

If you are interested in pursuing a real estate career, don’t shy away from the possibilities. Establish, strengthen and expand your professional networks. Organizations like CREW offer mentorship and networking functions. There are so many strong, smart, trailblazing women out there that we can look to as role models.

And never underestimate the resilience of women. Following Hurricanes Katrina and Rita, the New Orleans CREW affiliation lost more than half of its membership. But with the help of local commercial real estate businesses and national supporters, we were able to come back stronger than ever…and even increase our membership!

Support and comradery are crucial in any industry. Personally, I rely on my networking circles and business acquaintances often for support, and my affiliations have significantly contributed to my success. I encourage you to get involved. Grow a strong foundation. Lead the way for many more women to follow.

So even though Women’s History Month has come to an end, let’s not let the spotlight fade. As we turn the calendar page and welcome the spring season, let’s celebrate a time for opportunity and growth that will last throughout the year and beyond.