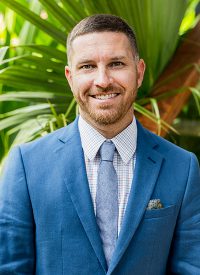 Ryan began his productive life in college by dumping trashcans at Outback Steakhouse. While quickly moving through the ranks of the Outback Steakhouse system, he ultimately decided on a career outside of the restaurant world – yet never completely let go of those restaurant roots (more to follow). He graduated in 2000 from the University of Louisiana at Lafayette in Business Administration with a concentration in Business Law.

In 2017, Ryan, alongside his wife, Traci, developed the Paws & Paw Paw’s boarding/daycare/grooming facility as a full-time job entrepreneurship opportunity for her. The maturing business now has a second location and is recognized as a best-in-class company in the Acadiana area.

Coming full circle back to those restaurant roots, Ryan set out to develop and bring a unique concept to the Lafayette market, introducing Tchoup’s MIDCITY Smokehouse. A traditional smoked BBQ menu, an elevated bar scene, and a great outdoor space have been molded into a 70ish-year-old home. The redevelopment of the residential structure commenced in January 2020, and the restaurant opened six months later in June. Having navigated the pandemic headwinds of 2020, the restaurant is thriving. The response from the community has been remarkably strong and humbling.

In January 2022, Ryan began the development of Adopted Dog Brewing, a 7bbl brewhouse that will be the first brewery within the city limits of Lafayette. With construction underway, the anticipated opening is Q4 of 2022.

He also serves on OneAcadiana’s Board of Directors and is the co-chair of the Urban Revitalization Committee. In addition, he served in an advisory role within the City of Lafayette’s Development & Planning Division’s Unified Development Code’s creation and refinement, as well as sits on the University of Louisiana’s Ragin Cajun Athletic Foundation’s Board of Director’s Executive Committee.