About > Our Team > Justin C. Landry 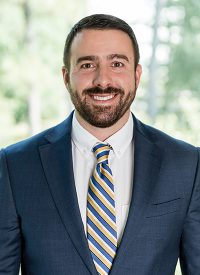 Mr. Landry joined Stirling Properties in October 2007. As Vice President of Finance & Capital Markets, Mr. Landry’s focus has been on evaluating the economic feasibility of new development and acquisition opportunities. Once the decision is reached to move forward with a development or acquisition, it is Mr. Landry’s responsibility to raise the capital to source the project and oversee financial and due diligence responsibilities through the close of transaction.

Outside of Stirling Properties, Mr. Landry previously served an Instructor at Louisiana State University for Finance 7720 – Commercial Real Estate Investing from 2012-2018. He is an active member of the International Council of Shopping Centers (ICSC). He is a former Committee Chair for ICSC’s Next Generation Louisiana Chapter, and he is a current member of its Scholarship Committee. Mr. Landry serves on various board committees for the West St. Tammany Chamber of Commerce. He is also a member of the 2019 class of Leadership St. Tammany and is currently involved with Louisiana Association of Business and Industry’s (LABI) Emerging Leaders Council. In 2019, he was the recipient of the prestigious ‘Money Makers’ award given by New Orleans City Business for his financial achievements and community impact in Real Estate. Additionally, Mr. Landry is on the Board of Directors for Vinson Guard Service, Inc. He is also, along with his wife, Founder and Owner of an expanding fitness business, Evolve Studios, soon to have three locations in Louisiana.

Mr. Landry graduated in 2007 from Louisiana State University in Finance with a Concentration in Real Estate; during his time there he was also a Track & Field student athlete where he received the Athletic Directors Cup for the achievement of academic excellence as a student athlete.