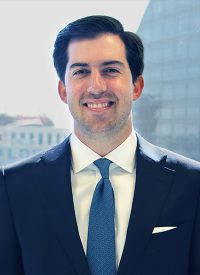 John Woodard serves as Director of Development and Asset Management for Stirling Properties, working dually from the company’s New Orleans and Covington offices.

He leads various development and redevelopment projects as well as asset management for many of Stirling’s Southshore properties, including the Pan-American Life Center, Mid-City Market, and Offices at Mid-City. In addition, he is responsible for new business development and government relations specifically focused on the New Orleans market.

Woodard previously held the role of Development Manager, where he was responsible for managing and assisting with all phases of Stirling Properties’ development and redevelopment processes, working in multiple capacities to support projects from the pre-development phase through stabilization. His duties include project analysis and due diligence, leasing and construction coordination, new business development, and government relations.

He has led several notable company projects, including the development of the Ochsner Kidney Care facilities in Jefferson, Metairie, Algiers, and Marrero and ongoing single-family build-to-rent projects in Prairieville, Covington, and Jackson, MS. Over the past year, John has also been involved with the asset management of over 1,000,000 square feet of retail, medical, and multifamily properties in Stirling Properties’ portfolio.

John is a graduate of the A.B. Freeman School of Business at Tulane University with an MBA in Finance and Real Estate. Prior to Tulane, he worked as an aide to Congressman Steve Scalise in Washington, D.C., and was later appointed by the President to serve as White House Liaison and Special Advisor at the U.S. Small Business Administration.

A Covington native, John graduated with a B.S. in Finance from LSU, where he also served as LSU Student Body President. He is a member of the Urban Land Institute (ULI) Louisiana, National WWII Museum Young Benefactors, LSU Young Alumni Council, LSU Greek Life Alumni Advisory Board, and Star and Crescent Foundation of Louisiana.