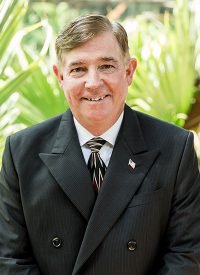 Camm Morton has been involved in commercial real estate sales and leasing for over 30 years. He currently works as a Senior Advisor in Stirling Properties’ Baton Rouge office. With a reputation for integrity and success, Camm brings unsurpassed national market experience managing companies in commercial property leasing, renovation, real estate development and property management. He has established an exceptional record of noteworthy accomplishments including bold mixed-use projects, Traditional Neighborhood Developments (TNDs), and the high-profile and successful renovation of the historic Hilton Baton Rouge Capitol Center in downtown Baton Rouge, Louisiana.

Camm has owned and successfully developed real estate in 29 states and Puerto Rico, including his own company and a billion-dollar NYSE-traded Real Estate Investment Trust (REIT).

Working as the President of Retail Development for Western Development Corporation, Morton served as the developer in charge of creating Potomac Mills, an outlet mall in Woodbridge, Virginia, in the Washington, D.C. metro area. Potomac Mills was later deemed "one of the most significant developments in retail" and was the prototype development of the Mills concept.

Before joining Stirling Properties, Camm worked as a Senior Advisor with SVN | Graham, Langlois & Legendre commercial real estate firm in Baton Rouge, Louisiana. He is a prior chairman of the Louisiana Lieutenant Governor’s Volunteer Louisiana Commission and has served in a range of volunteer capacities on numerous nonprofit boards including Boy Scouts of America, Junior Achievement and The Baton Rouge Growth Coalition. He has “rung the bell” at the NYSE and appeared on national news outlets including CNN and CNBC as well as the ABC TV news program 20/20. Camm has received many honors over the years, but his most cherished is his Boy Scouts of America “Silver Beaver” award.

Born in Birmingham, Alabama, Camm was raised in New Orleans, Louisiana, and Richmond, Virginia. He earned his bachelor’s degree in economics and psychology from Hampden-Sydney College where he played football and made two National Championship appearances. He holds a Master of Science degree in horticulture from the University of Florida and an M.B.A. from East Carolina University.

He is currently the CEO of VR Baton Rouge, which is affiliated with VR Worldwide, helping business owners create real value for themselves and their families.