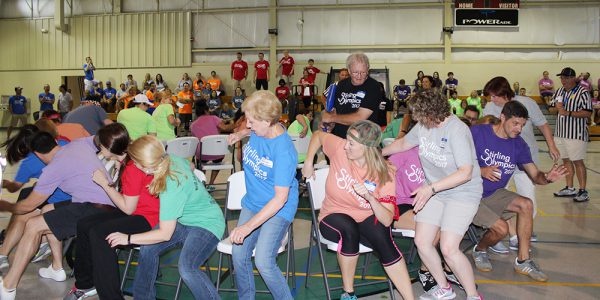 Stirling Properties has its own version of the Olympic Games! Employees recently celebrated the 5th Annual Stirling Olympics, an event hosted by the Stirling Stewardship Committee to raise money for charitable causes throughout the Gulf South region. The event was a HUGE SUCCESS, raising $53,000 for local nonprofit organizations!

Funds raised benefited Next Generation, which helps facilitate student-initiated lunch clubs on Junior and Senior high school campuses to connect students in conversation and with local mentors for guidance on real-life issues such as bullying, suicide, violence, drug abuse, relationship struggles, and excellence in education, as well as The Learning Tree, which provides educational, residential, and support services for children and adolescents with developmental disabilities. Representatives from each organization were on hand to accept a check for $26,500 each.

Throughout the day, Stirling Properties’ team members battled one another in quirky competitions and relay races such as Musical Chairs, Hula Hoop Chain, Caterpillar Race, Dodgeball, Bucket Heads, Puzzle Relay, and The Funky Chicken. Scores were tallied, and individual medals were awarded for each event. Although our athletic skills were not of world-class caliber, a good time was had by all!

At the end of the day, Stirling Properties’ partnership group treated everyone to a special presentation called “The Mane Event.” They competed among themselves in a hobby-horse obstacle course race! Employees were able to cast votes for Best of Show and Course Grand Champion. Donna Taylor swept the competition in both style and grace with her horse, Sassy Sparkle Boots. Townsend Underhill took home the award for Outstanding UNDERachievement with his horse, Race For The Crown.

And a big shout-out to the Stirling Stewardship Committee and the Olympics Committee for all their hard work organizing the event and making it happen! You all deserve a round of applause!!